So L was sick for almost a month with this and that, and it almost killed me which is a post unto itself.  I will write about that later, because there were some real self-discovery moments during that month, but I’ve really been wanting to write a post regarding E, because parenting a teenager is a trip and we’ve had an interesting time recently with E.Those of you who know E know that she’s a beautiful girl, but Westlake is a big place and there are lots of beautiful girls. During freshman year E felt like a small fish in a big pond and it really caused her some anxiety.  I think the fact that she is really beautiful made it tougher on her because she felt like she had to compete in the daily fashion show and beauty pageant…something that I never felt compelled to do in high school.  I was 5 feet tall, 10 lbs. overweight, my parents were bankrupt and I was severely depressed.  In a way, that freed me from trying to compete with the tall, thin rich kids with whom I went to school.  Not E…she’s that beautiful, skinny blonde chick, so she’s kind of hosed.  Believe me, we have talked a thousand times about the value of a person being innate and having nothing to do with outer beauty, but a lot of times high school wins no matter what.  It’s a sad fact.  Anyway, that’s another topic I could go on about but that’s not where I’m going with this.So E decided she has anxiety.  She determined that the only way to cope with this anxiety was to get a prescription for some kind of med. I shut her down.  She bothered me about it for months, trying to convince me that everyone was on pills at school for anxiety or depression, and I believe that that is fairly accurate. Our high school is notorious for drug use of all kinds.  Still, the answer was no and amazingly, she survived without drugs.  Fast forward to sophomore year and E seemed to be completely consumed by her social life and utterly uninterested in her schoolwork.  Her grades were deplorable and by the end of the semester she had failed two classes.  Let me just interject that the fall of 2012 was when I was completely immersed in trying to get a diagnosis for Lucy.  The diet changes, the different practitioners, the therapies…I was not on top of Eden the way I should have been and it was apparent.  I feel really bad about that.  Anyhow, for months E had been telling me she had ADD.  I had been telling her that she didn’t.  She was really trying to convince me to put her on meds for that, and she had the unfortunate support in diagnosing herself from her dad, who was never diagnosed himself but told E he was pretty sure he had it and that it wouldn’t surprise him if she had it, too.  Super helpful.

This kid’s barrage of ADD claims were unbelievable.  She was determined.  One day she came home and told me she’d been to see the school counselor about her ADD and wanted me to meet with her to discuss it.  Simply to get her off my back, I made an appointment with the counselor.  Before I went, I called the school psychologist that had evaluated L and asked what the procedure was for diagnosing ADD, and what to ask the counselor in my meeting.

Oddly, the counselor had no recollection of discussing ADD with E, only her classes and a few personal issues, but after a long chat about E’s feelings she said it would be best to at least get her tested so that we could move forward one way or the other.  I had insisted that even if E had ADD, we would not medicate her and that I suspected E’s problem was a real lack of personal accountability.  But I agreed to do the testing anyway.

So we went to the doctor.  We filled out questionnaires and had a long talk with him.  I got the impression that I could easily have directed that meeting toward medication and influenced it that way if I had wanted, which I didn’t.  Then I delivered multi-page questionnaires to E’s teachers.  It took weeks to get them all back, but after the doctor’s reviewing them it was clear that E did NOT have ADD and no intervention other that a boot on the backside was necessary.

When school started back up we took away the cell phone.  We restricted her social life.  We kept a sharp eye on her assignments.  Simple prescription, right?  She has maintained A’s and B’s for the last 6 weeks.  And I don’t doubt at all that it is difficult to concentrate with text messages coming in and Facebook status updates to look at and YouTube videos and Instagram photos calling.  That shit is distracting!  E has risen to the occasion, and I’m glad we were firm about no medication.  There are several reasons I was against it unless she was truly debilitated by anxiety or distraction or depression.  I know that there are certainly times when a person is truly mentally ill or has an urgent medical need and medication is necessary, but is that the case with the legions of teens that are medicated these days?

I think society at large has taught us that negative emotions and struggles are always bad.  I don’t think they are.  I think they are a normal part of the human emotional and experiential pantheon, and not only are they normal, they are useful and  powerful messengers.  So I want E to learn that if she is anxious, she needs to discover the root of the anxiety.  Does she feel inadequate?  Does she feel unsafe?  What is causing the anxiety?  Attack the cause.  Does she feel distracted?  What are the things pulling her attention from where it is supposed to be?  Fix that.  Does she feel depressed?  Has she experienced a loss?  Is she being mistreated?  What can we do solve those issues?  I really want her to understand that when we kill the messenger (the feeling) we miss the message (the issue that needs attention).  In this way she can learn to take responsibility for her happiness and not get stuck like so many people do in deadening pain and becoming self-destructive or, at the very least, unproductive.

It seems to me, after witnessing first hand and on more than one occasion that many times medication is the first step on a slippery slope of inadvertently teaching children avoidance tactics for dealing with the trials of life.  I know we all do it.  We all have ways to escape and that is natural.  Still, it is up to me to teach Eden grander coping skills that work when she discovers as we all do, that escape is an illusion.  She needs to learn that work is hard and reward is hard won.  That when something is painful or scary rather than comfortable and easy, that is where the lesson is.  Every damn time, in my experience.  And I think no matter what your spiritual belief, it is a spiritual truth that the lesson always catches up.  If you are conscious of the opportunity, you might as well learn it the best you can the first time.

One night during the whole ADD investigation A and I were talking about what we want for our kids.  I think instead of being focused on E making great grades and getting into a good school, I need to focus on making sure she is happy and has the character, work ethic and emotional tools for success.  That means she needs to learn that there are no shortcuts and what you put into something is what you get out of it.  If there are some failing grades along the way but she learns the lesson it will have been worth it.  I don’t care if she is a doctor or an engineer or a teacher or a professional wakeboarder or a janitor or a waitress or Bill Gates or Beyonce, as long as she does her work with accountability and integrity.  As long as she shows up and at the end of the day feels good about the job she’s done.  At work, and in front of God.  I want her to learn to pay attention to the messages from her spirit and to respond accordingly.  That’s what I want for her.  I guess I don’t just want that for her, I want that for the world.  Because we see every day how much an unhappy person can have a miserable ripple effect on the world around them.  The opposite is true, though, too.  Happy, loving, secure and wise people have the same, and I hope greater, ripple effect on the world around them.

This is the list we keep on the fridge for the teenager in the house. Maybe some of it will seep in.  I can see every day in her that much of it already has.  I’m a lucky mother. 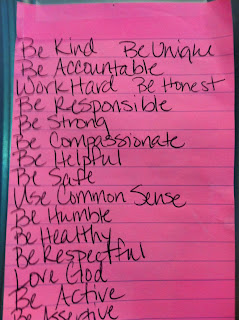